Did you know that when it comes to marketing for your company, you can actually spend less and get more?

Yup. You read that right.

The fact is, inbound marketing has changed the way we spend our marketing dollars. And the best part? It’s proven to be less expensive and even more effective than traditional marketing strategies.

Now, we know your mamma didn’t raise a fool. You want proof.

Not to worry, we’ve got you covered. We’ll share with you some time-tested ROI metrics to help you understand how inbound marketing generates new leads, nurtures existing ones and closes more deals.

But before we get there, let’s get into a little of what inbound marketing is and why it works.

What The Heck Is Inbound?

Very simply, inbound marketing is the most cost-effective way to reach visitors and convert them into customers in today’s digital world.

The method underpinning this marketing strategy uses tactics that align content with what customers are already interested in, nurturing those leads along conversion paths so they become delighted, outspoken promoters for your brand.

Unlike traditional or outbound marketing strategies, which tend to be interruptive and expensive, inbound marketing attracts customers by providing them with compelling, engaging, and relevant content exactly when they’re looking for it.

The way people seek and consume information has undergone a massive sea change in recent years. Consumers are searching for content that matters to them, rather than having to wade through a scattershot of messages that don’t.

“61% of consumers say they feel better about a company that delivers custom content and are also more likely to buy from that company.” (Custom Content Council)

Fun Fact: A 30-second Super Bowl spot is $4 million while a 60-second spot goes for $8 million according to Forbes Magazine

CPMs— or cost per 1,000 website impressions — on digital platforms can vary widely depending on which social media platform you’re using, but generally, Twitter is the cheapest at $5.76, while LinkedIn and Instagram come in at $6.05 and $6.70 respectively. FaceBook is the most expensive at $9.06 CPM.]

Certainly, for some companies, outbound marketing is effective if they have millions of dollars to throw at broad targets to see what sticks. But in today’s tech-savvy world full of cellphones, laptops, satellite radio, DVRs, and social media, even well-funded traditional marketing efforts aren’t reaching the audiences they once were.

For small businesses that don’t have marketing budgets in the millions, there are few options for inexpensive marketing more effective than an inbound strategy.

Because you have to consider the ROI on traditional marketing options for small companies. A billboard in the sticks is inexpensive— but who’s going to see it? A 3 am radio spot is great if you’re trying to reach insomniacs, and let’s face it, most circulars end up in the trash.

So rather than using interruptive traditional— and expensive — strategies that aren’t effective, companies are focusing on building relationships with their customers and acting as a valued resource to them.

“80% of business decision makers prefer to get information in a series of articles versus an advertisement.” (Exact Target)

All the data suggests, if you can provide valuable content to your consumers, capitalizing on subject matter that’s engaging and helpful to them, they will be searching for you, not the other way around.

And what company doesn’t want that?

“Can I please pay more and get less?” (Said no one ever.)

We’ve established that for the vast majority of businesses, outbound (traditional) marketing strategies are expensive and no longer reach the audiences they used to. So why are some companies still trying to compete using these strategies?

In many cases, it’s simply a case of metathesiophobia (or fear of change for those not fluent in Latin). But sticking your head in the sand isn’t a good strategy for growth, so business owners and marketing professionals that haven’t embraced inbound marketing should know that failing to do so will actually cost them money. 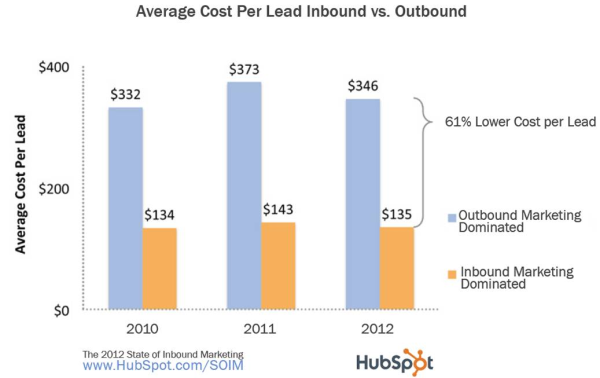 Let’s break that down. The chart below shows that the average cost per lead for inbound marketing is significantly lower than outbound marketing.

Why Hubspot is Your Best Friend

How is that possible, you ask?

HubSpot’s robust reporting capabilities provide you with actionable information so you know who’s viewing your content and how they’re viewing it.

Not only does this information help you hone your content to align with what the consumer is seeking (and how they’re seeking it), but it also saves you money because you’re not spending dollars on campaigns that don’t convert.

Let’s dig into some specific examples.

HubSpot’s Sources Report helps businesses understand who they’re capturing at the beginning of the lead-to-conversion process. Understanding where your viewers are coming from— i.e. the source of their viewership — provides huge insight into which channels merit further investment and which ones just aren’t performing.

And what good is putting up content without being able to put a value on its importance? And without knowing which pieces are actually taking people from interested to committed? That’s where HubSpot’s Attribution Reports are invaluable. The more you understand the type of content you can attribute directly to converting viewers to consumers, the more time and resources you can spend on expanding that content. (And avoid spending money to generate content that falls flat.)

Social media marketing is a huge part of any effective inbound strategy, but how do you know which platforms are working and which aren’t? What time of day is your highest viewership, and how many people are you actually reaching? HubSpot’s Social and Reach Reports both offer insight into all of these questions and more.

HubSpot offers a plethora of lead generation and sales reports that deliver the metrics you need to develop the most successful campaigns, analyze which keywords are hitting their intended targets and whether consumers are finding your landing page.

And that, my friend, is why HubSpot is your most valuable inbound marketing partner.

As the old business adage says, you can’t manage something if you can’t measure it.
Inbound marketers are sometimes criticized for reporting “soft” metrics that don’t really give anyone a sense of which strategies produce the highest ROI.
To determine actual ROI, you need to capture metrics beyond social engagements and impressions. You’ve got to look at the total cost of any marketing effort, including salaries, overhead, and revenue as it relates to the cost of customer acquisitions.

Here are the six marketing metrics you need to get the true scope of your efforts.

Got it? Good. Go grab yourself a cold one. You deserve it!

Working FOR not AGAINST

We’ve covered a lot, but the key takeaway is this: Inbound marketing is effective because it’s a two-way street. It works for businesses because it works for customers.

It’s marketing that reaches audiences with content precisely when they’re looking for it, through channels they use, and in all stages of the buying process.

And understanding and capitalizing on the type of deep-dive marketing metrics that are now available, companies can leverage inbound marketing to grow their business— and their bottom line.

Turns out? With inbound marketing, free lunches are a thing. Spend less, get more. What’s not to love?

About the Author: Atomic Design & Consulting